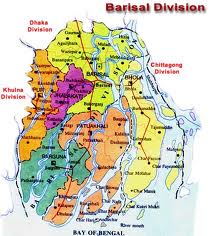 Barisal Correspondent
Barisal city suffered from water logging and lack of power and water
supply for more than 12 hours on Thursday due to hit of Mahasen, the
first cyclone of the season formed in the Bay of Bengal.
The storm started hitting the city areas from early morning and
continued till 9:00 am Thursday damaging huge trees, makeshift houses
and slums.
Besides the total region remained cut off as the road and water
transportations stopped from Wednesday evening continued on Thursday.
After visiting different areas of the city it was found that unplanned
drainage and sewage system of the city created water logging for long
time following the downpour due to the cyclone.
The low lying areas and the areas near the Kirtankhola River banks
flash flooded by tide and rain water.
Huge trees and plantations also damaged by the storm.
Tarikul Islam, executive engineer West Zone Power Distribution Company
Division-2 of Barisal said power supply was stopped to avoid accident
from torn of live electricity wire. Resumption of power supply delayed
as broken branches of trees fallen on the line.
Power supply resumed in most of the areas by evening. We are checking
and repairing the lines and power supply at all areas would be normal
soon, the WZPDCO official assured.
Barisal City Corporation water supply in charge Shafikur Rahman , said
water lifting power pumps could not able to operate due to lack of
power supply and pumps will start functioning as soon as getting
power in areas.
Md. Shahidullah, Barisal Port officer, said water transportation not
resumed as weather signal no.2 for the port, not cancelled after the
storm passed the area and the rivers still rough.
Saidur Rahman Rintu said triple deck launches on Barisal-Dhaka-Barisal
route will ply from Friday if authourity permits.
Gopal Chandra Majumdar, BIWTC Barisal station manager, said rocket
steamer PS Ostrich anchored at Barisal port will leave for Dhaka
Friday.
Alamgir Hossain, president bus owners association, said road
transportations not resumed as the ferry services yet to be normalised
and lack of passengers in adverse weather situation ahead of weekly
holiday.
Deputy Commissioner Barisal Shohidul Alam said till this report no
death news was reached at the district disaster management control
room.
Upazila nirbahi, agriculture, forest and municipal officials asked to
send damage assessment reports and demand for relief items, if any
needed, as soon as possible, DC Barisal told.