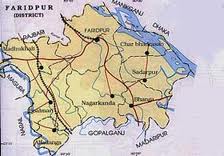 A daring dacoity was committed in the village Bilmamudpur under Sadar
upazila here on Sunday night.
The dacoits decamped with gold ornaments, cash and mobile phones worth
about taka 15 lakhs after stabbing four persons of a family.
Local people said that at the dead of night a gang of 12 to 14 robbers
entered into the house of one Dubai expatriate Sikandar Ali Sheikh and
looted the valuables.
The dacoits broke open the steel almirah and took away 20 tolas of
gold, cash taka three lakhs and eight cell phones worth about taka 15
lakhs from the house located in the suburb of the town.
The injured persons were admitted to Faridpur Medical College Hospital
immediate after the incident.
According to police source Sikandar and his son Rashed have come to
Bangladesh ten days ago from Dubai on leave.
The dacoits fled away when one UP member Abdus Salam who is staying
nearby their house opened fire from his own firearms listening the hue
and cry from Sikandar’s house.
Officer in charge (OC) of Kotwali police station told journalists they
are trying to nab the dacoits and to recover the looted valuables.
A case was filed with Kotwali Police in this connection.
(BSS, faridpur)