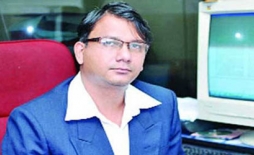 Dhaka, Nov 15 – Detectives on Thursday pressed charges against eight members of banned militant outfit Ansar Al Islam, also known as Ansarullah Bangla Team (ABT), in connection with the murder of publisher Faisal Arefin Dipan. Assistant Commissioner of Detective Branch (DB) Fazlur Rahman, also the Investigation Officer of the case, submitted the charge-sheet against them to the Chief Metropolitan Magistrate’s Court of Dhaka.
Six of the eight suspects have been arrested under several cases, including the one for the murder of Dipan. They have also given confessional statements in court, admitting their involvement in the Dipan killing as claimed by police earlier in a press conference on October 30.
The six arrestees are killing squad leader Moinul Hasan Shamim alias Samir alias Imran, 24; trainer Abdus Sabur alias Samad alias Sujon alias Raju, 23; top ABT operatives Khairul Islam alias Fahim alias Jishan, 24, Sheikh Abdullah, 27, Abu Siddiq Sohel, 34 and Mozammel Hossain alias Salmon, 25.
Apart from them, police claimed sacked army major Syed Ziaul Haq, the military wing commander of the outfit, planned the killing.
Zia and another suspect Akram Hossein alias Hasib are still on the run.
Apart from the eight accused, investigators also found the involvement of another suspect in Dipan’s murder but did not include his name in the charge sheet as they were not able to verify his actual identity and address.
Faisal Arefin Dipan, 43, was the publisher of Jagriti Prokashani. He was hacked to death at his office in Dhaka’s Shahbagh on October 31, 2015. Later, his wife filed the case with Shahbagh Police Station accusing unknown persons.
Dipan was stabbed twice in the head and once on the neck with a machete, according to the autopsy report.
Just hours before the attack, publisher Ahmedur Rashid Tutul and his friends, bloggers Ranadipam Basu and Tareque Rahim, were injured in a machete attack at Tutul’s publishing house “Shuddhoswar” in Lalmatia.
Both Tutul and Dipan were publishers of freethinking online activist writer-blogger Avijit Roy, who was hacked to death by assailants in the capital’s TSC area on February 26, 2015.
According to investigators, ABT, said to be the Bangladesh branch of Al-Qaeda in the Indian Subcontinent (AQIS), carried out targeted attacks on secular writers, bloggers, publishers, freethinkers and LGBT rights activists between 2013 and 2016.