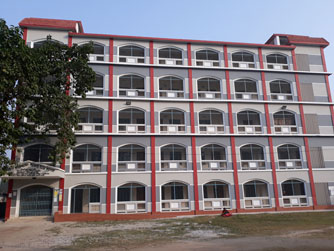 Education Engineering Department (EED) has implemented 5403 schemes involving around Taka 2259.12 crore in over last ten years in all eight districts under Rajshahi division.
Implementation works of 503 other schemes are progressing with an estimated cost of around Taka 210.45 crore. Mijanur Rahman Engineer of EED, here said implementation of another 265 schemes involving around Taka 110.81 crore is under process.
He added that 378 private colleges were developed in order to quality improvement in education with the assistance of information technology.
Development of 126 other colleges is progressing.
Besides, the necessary development of 802 private schools was completed. Seventy-seven private schools in Upazila Headquarters were transformed into where there were no government schools.
Academic buildings were constructed in 238 madrasahs and construction works in 28 others are going on.
Forty-five schemes were implemented with financial support from the Islamic Development Bank aims at enhancing the madrasah learning environment.
Fifty-six schemes were implemented under the development of post-graduation government colleges at district headquarters for improving quality of
education.
Maintenance and renovation related 2856 schemes were implemented and 75 others are progressing fast.
Twenty-three schemes were implemented in the establishment project of Pabna Science and Technology University at a total cost of Taka 75.67 crore.
“We are constructing seven technical schools and college in seven Upazilas with an estimated cost of around Taka 104.57 crore,” Engineer Mijanur Rahman informed.
Implementation works of two schemes have been completed and three others are progressing under the project of strengthening of education engineering department through establishment of head office and district level offices.
New academic buildings were constructed in both public and private institutions and 194 other works are progressing fast. Furniture supply
related 296 schemes were implemented and twenty-eight other works are advancing.
Seventy-eight secondary education sector investment programs were implemented and forty-five others being implemented at present.
Five teaching quality improvement in secondary education projects were also implemented.
Engineer Rahman mentioned that the educational institutes in the region got a new look amidst the infrastructural developments.
Multi-storied buildings were constructed to modernize the institutions both in urban, semi-urban and rural areas, he added, reports BSS from Rajshahi.