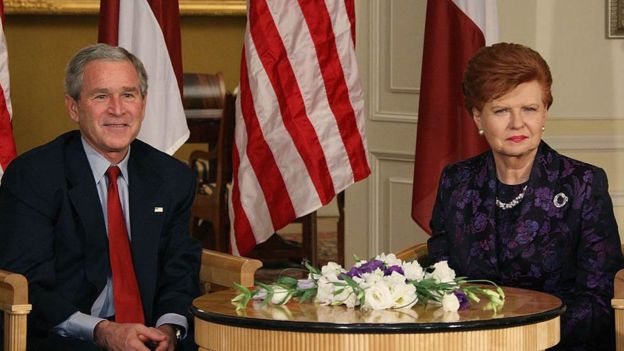 The little girl who fled from war-torn Latvia spent more than 50 years in exile – but soon after returning she became president.
Not only that, Vaira Vike-Freiberga became the first female head of a former Soviet bloc state.
“My parents never let me forget that I am Latvian,” she told the BBC.
The Baltic state was invaded by Nazi Germany and the Soviet Union during World War Two.
She has vivid memories of that chaotic time, especially 1944, when Russian troops – the communist Red Army – marched back into Latvia.
“I was impressed by the ones with the red flags and the fists. So at one point, as one of them marched by, I raised my fist in the air and shouted ‘hurrah!’,” she says.
“At that point I saw my mother lean against the lamppost, absolutely stricken, with tears streaming down her cheeks, saying ‘Please, child, don’t do that. This is a very sad day for Latvia’.”
Cruel lessons
The family’s odyssey westward took Vaira, aged seven, first to devastated Germany. Then they moved to French-ruled Morocco, then to Canada.
She did not return to Latvia until 1998, aged 60, and became president within eight months.
Vaira remembers her father listening to the BBC World Service in 1944, desperately trying to fathom where the war was heading.
Later that year her parents made the agonising decision to leave Latvia.
“We took the ship on New Year’s night of 1945. It was a transport ship with troops and with armaments and of course if it gets torpedoed it’s going to blow it up. But they have taken a certain number of civilians with them, who also want to flee from communism at any price. Latvians gathered on the deck and sang the Latvian anthem.”
The family reached the refugee camps being set up across Germany. The conditions were very harsh and her baby sister fell ill with pneumonia and died, just 10 months old.
Within a year Vaira’s mother gave birth again, to a baby boy. But for Vaira the event was overshadowed by another cruel life lesson.
“A young girl of 18 was lying in the same room with my mother. She had given birth to a little girl and didn’t want her. She didn’t want to name her child and she didn’t want to have anything to do with it, because the child was the result of a group rape from Russian soldiers,” she says.
“Each time the nurses brought that poor child to the mother, she would turn her face to the wall and cry and refuse to talk to her. The nurses gave a name to the girl – Mara, which was my sister’s name.
“And I thought that was really too much, because here was a Mara who was born, who was surviving and who was absolutely not wanted in this world. And our Mara, whom we had wanted so much, was taken from us. I realised that life was really very strange and certainly very unfair.”
Child marriage scare
At the age of 11, Vaira had to move again, to Casablanca in French Morocco.
“We were thrown out, as it were, from a truck in the middle of the night in what turned out to be a small, temporary village. It was a world in miniature,” she says.
“There were French people there, there were all sorts of foreigners, Spaniards from the time of the Civil War, Italians and old Russian émigrés from the European quarter in Shanghai.”
One of her father’s Arab co-workers said she was ready to be married off, though she was just a child.
“Dad would come home and he’s saying, ‘He’s giving me 15,000 francs dowry. And he offered me first two donkeys and cattle and then later he kept upping the price and I said, but she’s just a child and she has to go to school.’ He said, ‘That’s all right, we’re willing to let her finish school’.”
Her parents laughed at that, but Vaira was alarmed, reports BBC.