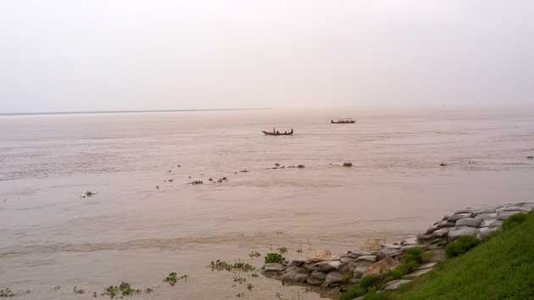 Dhaka, July 26: The flood situation in the Ganges basin worsened further as the water level of the rivers in the region continues to rise due to heavy downpour and onrush of water coming from upstream.
A rising trend of water levels in Pankha, Rajshahi, Hardinge Bridge and Talbaria Goalunda points was recorded in the last 24 hours ending 9 am Sunday, Superintendent Engineer of Bangladesh Water Development Board (BWDB) Mukhlesur Rahman told BSS.
The water level of the Ganges River increased by 14 centimetres at Pankha point in Chapainawabganj, while 10 cm at Rajshahi point, five cm at Hardinge Bridge point and 12 cm at Talbaria point.
The water level of the Padma River went up by five cm at Goalunda, Bhagyakul and Mawa points, according to the BWDB data.
But, Mukhlesur said, the Ganges River was flowing 183 cm and 171 cm below the danger level at Rajshahi and Pankha points, while 21 cm above the danger mark at Talbaria point this morning.
Besides, the water levels of the Korotoa River and the Jamuna River flowing through Bogura and Sirajganj districts were on the rise, worsening flood situation in the two districts.
Arifuzzaman Bhuiyan, executive engineer of Flood Forecasting and Warning Centre (FFWC), said the water level in the Korotoa River increased by five cm at Bogura point.
He said the Jamuna River water rose by two cm at Sariakandi in Bogura, six cm at Kajipur in Sirajgonj and five cm at Sirajganj point, and the river was flowing 119 cm, 100 cm and 88 cm above the danger mark at Sariakandi, Kazipur and Sirajganj points respectively this morning.
The water level of Gur River increased by three cm at Shingra point in Natore and the river was flowing 93 cm above the danger mark. The Atrai River was flowing 106 cm above the danger level at Baghabari point in Sirajganj district with four cm further rise.
Water level in the Mohananda River also went up by five cm at Rohanpur and seven cm at Chapainawabganj.
Of the 14 river points monitored in Rajshahi division, water levels increased at 11 stations, while decreased at two stations and remained stable at one point.
The flood situation remained mostly stable in eight northern districts with further fall of river water in the Brahmaputra basin during the last 24 hours ending at 9 am today, BSS Rangpur correspondent reports.
Water levels of major rivers in the basin marked fall during the period with a possibility of improvement of the flood situation in the next 48 to 72 hours, according to the FFWC.
But, the major rivers in the basin are still flowing above the danger mark at 10 points in Kurigram, Gaibandha, Jamalpur, Bogura and Sirajganj districts at 9 am today.
Water levels of the Brahmaputra decreased by 7 cm at Noonkhawa point and 5 cm at Chilmari, and it was flowing 58 cm above the danger level at these points.
The water level of Dharla River marked fall by 18 cm at Kurigram and Ghaghot River went up by one cm at Gaibandha as the rivers were flowing above the danger levels at these points.
The Jamuna River water was flowing 104 cm above the danger level at Fulchhari point, 112 cm above at Bahadurabad point, 119 cm above at Sariakandi point, 100 cm above at Kazipur and 88 cm above at Sirajganj points at 9 am today.
BWDB chief engineer for Rangpur Zone Jyoti Prosad Ghosh said all flood control embankments and structures remain safe and riverbank protection works continue at some vulnerable points to check erosion in the zone.
He predicted a stable flood situation in the next 24 hours with probability of improvement of the situation during the next 48 to 72 hours in the basin.