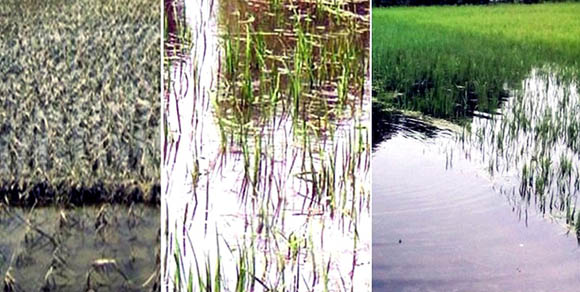 Rangpur, July 26: The government through the Department of Agricultural Extension (DAE) has taken frantic steps to assist affected farmers in recouping crop losses caused by flood in two phases in Rangpur agriculture region.
Additional Director of the DAE for Rangpur region Muhammad Ali today told BSS that the second phase of the deluge has submerged standing crops on 12,294 hectares of land in 30 affected upazilas of all five districts in the region.
“The extent of crop damages might be higher this time due to a cooperatively prolonged submergence than damages caused for short time inundation during the first phase earlier this month,” he said.
During the first phase of the deluge, standing crops on 13,465 hectares of land were submerged, and of those, crops on 8,612 hectares of land were totally damaged causing production losses of 32,664 tonnes of crops worth Taka 104.83 crore in the region.
“The first phase of the flood affected 82,412 farmers of 18 upazilas in four districts except Nilphamari, out of total five in the region, by damaging their standing crops,” Ali said.
The first phase of the deluge damaged standing crops including Aman rice seedbeds, Aush rice, vegetables, jute, ‘Till’, ‘Kawn’ green chilli, ‘Cheena’ and some other crops.
Meanwhile, the second phase of the deluge has submerged standing crops on 12,294 hectares of land out of total standing crops on 2,02,431 hectares of land in Rangpur, Gaibandha, Kurigram, Lalmonirhat and Nilphamari districts of the region.
The submerged crops include standing Aman rice seedbeds on 607 hectares of land, Transplanted Aman rice on 897 hectares, Aush rice on 3,551 hectares, vegetables on 368 hectares, maize on 80 hectares, green chili on 65 hectares, ‘Tiil’ on 40 hectares, groundnut on 10 hectares and jute on 5,955 hectares of land in the region.
Meanwhile, assessment of damages among submerged standing crops continues now as a portion of the submerged crops would recover from the stresses for remaining under floodwaters for three to four days.
Officials of the DAE and other agriculture related organisations are suggesting farmers for preparing Aman rice seedbeds anew as enough time is lest for transplantation of seedlings and preparing to cultivate substitute crops after recession of floodwaters.
The DAE and other agriculture related organisations are taking massive post-flood agri-rehabilitation programmes as per government directives to assist flood-affected farmers in recouping crop losses.
“The DAE has started preparing Aman rice seedbeds on 221 acres of land, including 105 acres each in Kurigram and Gaibandha, five acres in Rangpur and three acres each in Lalmonirhat and Nilphamari in flood-hit areas at union and ward levels,” Ali said.
The produced Aman rice seedlings will be distributed among flood-affected farmers at their doorsteps free of costs for re-transplantation on their affected croplands by August 15 next.
“Besides, Aman rice seeds will be distributed among flood-hit farmers for broadcasting those on their croplands after August 15 next in case of a prolonged flood,” Ali said, adding that early varieties of vegetable seeds are also being distributed among them.
Besides, flood- affected farmers will cultivate late ‘Ganjia’ varieties of Aman rice using their own seeds, early varieties of ‘mash kalai’, vegetables, maize and other crops on their affected croplands.