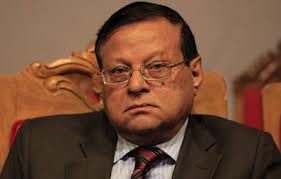 Law Minister Barrister Shafique Ahmed on Thursday said people’s expectations have been fulfilled through the verdict of International Crimes Tribunal-2 sentencing Jamaat leader M Kamaruzzaman to death for war crimes.The minister said this while talking to reporters at his office in the afternoon.
ICT-2 on Thursday condemned M Kamaruzzaman, assistant secretary general of Jamaat-e-Islami, to death for his crimes against humanity during the country’s Liberation War 42 years ago.
Shafique also said the judgment also freed the national from a stigma attached to it for long.
Mentioning that the trial of the war criminals was an electoral manifesto of the ruling Awami League, he said this verdict partially fulfilled the pledge.
The minister also said the rule of law has been established and the victims got the justice through the verdict.
Replying to a question about the opposition’s allegations that the war crimes trial is politically motivated, he said the trial is being held maintaining international standards and transparency. “So, there’s no chance to raise any question about the trial.”
Shafique said the verdict will be executed after the judgment of the Appellate Division if Kamaruzzaman goes there.
Claiming that they know the whereabouts of war crimes convict Abul Kalam Azad, Barrister Shafique said, “It won’t be right to disclose it. The Home and Foreign ministries are trying to bring back him.”
Meanwhile, State Minister for Law Advocate Quamrul Islam said no one can stop the trial of the war criminals by creating anarchy in the country. UNB