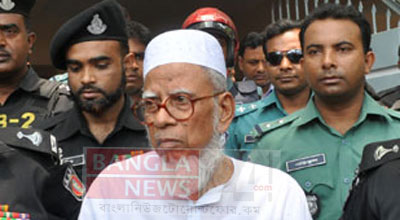 DHAKA: The International Crimes Tribunal (ICT)-1 has sent Jamaat-e-Islami senior Nayeb-e-Ameer AKM Yusuf to jail on Sunday afternoon.Chairman of ICT-1 ATM Fazle Kabir passed the order at his chamber as working hour of the tribunal was over.
Earlier in the day, law enforcers arrested him from his Dhanmoni residence after ICT issued arrest warrant against for his alleged involvement in wartime crimes against humanity.
On May 8, state prosecution submitted formal charge against Yusuf with 15 allegations, including rape, looting and genocide to ICT.
Meanwhile, the prosecution also sought tribunal directives in issuing arrest warrant against the Jamaat leader.
Yusuf was also charged for forming Razakar force, collaborators of the Pakistan occupation army, first in Khulna during the Liberation War.
Earlier on April 22, probe body of International Crimes Tribunal (ICT) submitted charge sheet against AKM Yusuf with 15 allegations including rape, looting and genocide.
Allegations against AKM Yusuf
Yusuf established the Razakar force, an auxiliary force of the Pakistani army, on May 5, 1971, at an Ansar camp on Khan Jahan Ali Road in Khulna with 96 Jamaat activists.
He had gathered men to form the Razakar force since April 18, 1971
Before establishing the force, Yusuf, as the chairman of the Peace Committee of greater Khulna (Khulna, Satkhira and Bagerhat) had formed peace committees in every sub-division, police station and union.
According to historic documents, Razakars were active in Bangladesh from May, 1971, but the then Pakistan government formally established the force through a gazette notification on August 2.
The suspect, as the then ameer of Khulna district unit Jamaat, led all the anti-liberation elements and political parties in the region where the Pakistani army and their collaborators killed at least 1 lakh people.
Yusuf, who was a member of AM Malek’s cabinet in 1971, monitored activities of several peace committees, Razakar and Al-Badr forces and delivered speeches at different anti-liberation rallies.
Inspecting a Razakar camp in Satkhira on November 12, 1971, Yusuf said, “The Razakars of Satkhira have played a vital role in destroying the Indian agents and infiltrators.” He guaranteed that arrangements would be made to provide jobs for all Razakars, the book reads.
On November 28, 1971, speaking to journalists at Karachi in Pakistan, Yusuf said, “The Razakars are standing shoulder to shoulder with our brave soldiers in combating the Indian aggression.”
He suggested that the Razakars should be provided with more modern weapons in order to annihilate “miscreants”, read the book.
The Pakistan government, army and their collaborators used to identify the freedom fighters as “Indian agents”, “infiltrators”, “miscreants” and termed the Liberation War “Indian aggression”.
In the last week of February in 1972, AKM Yusuf was arrested along with 37,000 people including cabinet members, political leaders for assisting Pakistan army during liberation war.
He was awarded with lifetime imprisonment on December 5 in 1973, he was released in general amnesty of the then government.
(Source: banglanews)