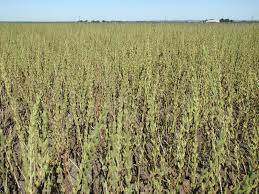 Farmers in the district are taking delight in the highest production
of sesame seeds they have got this season.
This year, sesame was cultivated on 800 hectares of land in the
district against the targeted 1,049 hectares.
Sources said being a drought- tolerant crop, sesame has the
possibility of getting damaged in rainwater or surge.
That is why, the growers cultivate sesame on comparatively high land
or homesteads.
Sources at the Department of Agricultural Extension (DAE), Jhalakathi
said the farmers of the district could harvest two times sesame seeds
by cultivating high-yielding varieties—BARI-3 and BARI-4, developed by
the Bangladesh Agriculture Research Institute, instead of the local
varieties.
The farmers got 600-700 kilograms of sesame seeds per hectare of land
by cultivating the local variety while the high-yielding varieties
produced 1 to 1.5 tunnes.
The farmers now start cultivating sesame at the beginning of Robi
season, as rainfall now starts in April due to impacts of climate
change.
Faruk Alam, a farmer, said he cultivated sesame on one bigha land and
hopes a bumper production of the crop for its earlier cultivation to
avoid rain and surge.
(Source: UNB, Jhalakati)