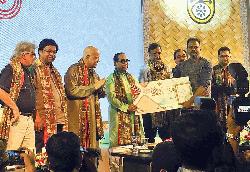 Culture Desk
This year feted print maker Kamruzzaman Sagar has bagged the Bangladesh Shilpakala Academy Award 2019 (valued at BDT 2 lakhs) at the 23rd National Art Exhibition for his work Global Warming (Lithograph). He is now an Assistant Professor of Printmaking Department at the Faculty of Fine Arts (FFA), University of Dhaka (DU).
It might be added here that global warming is a long-term rise in the average temperature of the earth’s climate system. Effects of global warming include rising sea levels, regional changes in precipitation, more frequent extreme weather events such as heat waves, and expansion of deserts. Global warming impacts humans by, amongst other things, threatening food security from decreasing crop yields, and the abandonment of populated areas and damage to infrastructure due to rising sea levels alongside severely harming ecosystems.
‘Global Warming’ has won him the prestigious award for this year not just because it resonates with the weal and woes surrounding this modern menace. Kamruzzaman has curiously presented the harrowing scenario of loss and isolation in a rather serene and strangely solemn mood keeping up with his typical style. In the print the land appears barren and the landscape desolate. There are but two birds discernible as only breathing beings. Towards the latter half of the land there stands a wooden table with a basket made of straw underneath while one of the only two birds in the picture flies closely over. This portion seems in an altogether different segment and as a mockery to human habitation that has brought about this dire predicament to lives on earth. A glass of drink towards the bottom of the land adds to this fiasco.
In the background there is predominance of a peculiar blue in two even more peculiar phases. The first one probably hints at sea levels covering all kinds of living beings and the latter overarching one at an ominous looming future.
Isolation and tranquility are two vital apparatus in the works of Kamruzzaman, one of the noted contemporary Bangladeshi printmakers. His works also delve deep into complexity of human life and he has a great attempt to blend surrealistic metaphors in his prints. His any single print could be divided into several segments and each section denotes a story which is dissimilar to the other. Many of his prints explore different avenues to aviaries and illusions which are very recurrent features in his prints. His prints are laborious, exhilarating and thought-provoking. The subjects of his works are sometimes in solemn mood and their characteristics are highlighted.
Kamruzzaman’s prints appear neat and clean, and always keep away from any over ornamentation. His prints are fresh, unusual and offer the viewers a sense of pure ecstasy and pleasure. His compositions are lively and have the right kind of restraint. He knows where to stop. Lighting is a prominent feature in the prints and the artist generally prefers incandescent light and mystifying setting. His earlier works are more quiet and inexpressive as well as his figures looked emotive and poignant. He then concentrated on mainly the figure. Expressions of the subjects are not quite noticeable in the works. During that time, the painter took his concern with human isolation to its logical explanation. His themes and approaches were closely connected to physiological experiments. He also added illusion and emotion to his works.
The 23rd National Art Exhibition is now on at the National Art Gallery of Bangladesh Shilpakala Academy in the city.