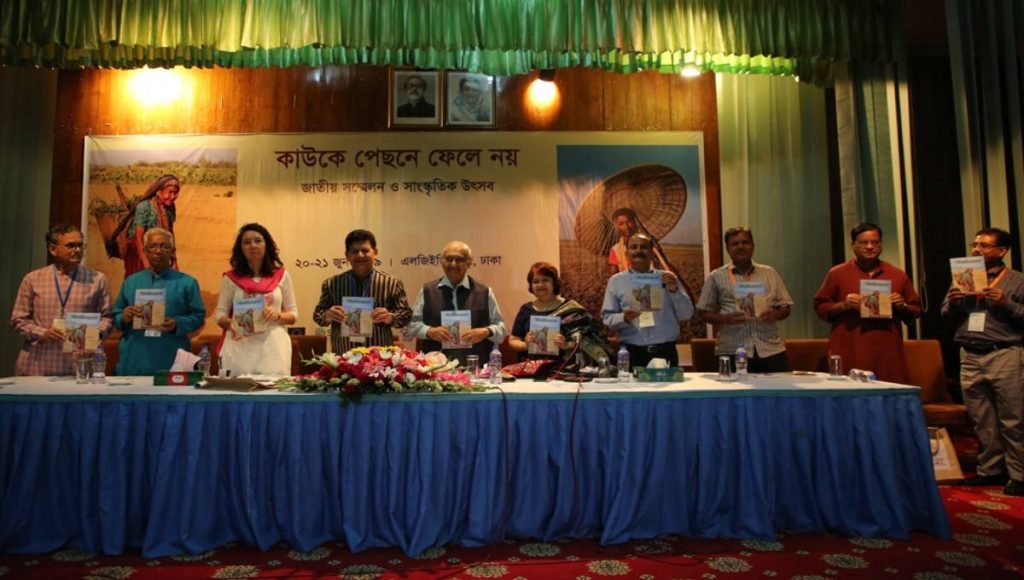 He calls for incorporating their voices in the national budget
Dhaka, June 20 – Chairman of Centre for Policy Dialogue Prof Rehman Sobhan on Thursday said marginal communities have to gain political power along with increasing their capabilities to end repressions against them.
He also underscored the need for protecting traditional rights of small ethnic communities to land and called for incorporating their voices in the national budget.
“Those who have huge money and political power are involved in repression and grabbing land (of the marginal and the excluded groups),” he said at the inaugural ceremony of a two-day national convention and cultural programme at the LGRD auditorium in the city.
Society for Environment and Human Development (SEHD) organised the programme titled ‘Convention on Discrimination, Exclusion and Rights of the Marginal and Excluded People’ with the slogan ‘Leaving no one behind’.
Prof Sobhan, speaking as the chief guest, said: “The marginal communities must attain political power alongside capabilities to end repression against them.”
He pointed out that there are political parties comprising of minority groups in India. “The minority communities have to be visible in our country that way,” he said.
Some 300 members from 50 communities, including Bede, Horizon, Kayputra, Bihari and Rishi, are participating in the two-day event.
Chairman of Power and Participation Research Centre (PPRC) Dr Hossain Zillur Rahman, who presided over the inaugural ceremony, said the marginal communities must work together to address their problems.
Claiming that there is discrimination in the country’s development efforts, he said the government should think anew to this end.
In the keynote paper, SEHD Director Philip Gain said the government has so far recognised 50 ethnic communities and that more than 50 such communities should also be recognised.
Litterateur Harishankar Jaladas, Kamalganj pazila parish vice-chairman and Bangladesh Tea Workers’ Union General Secretary Ramvajan Koiri, CPD Distinguished Fellow Prof Rounaq Jahan, Executive Director of the Christian Commission for Development in Bangladesh (CCDB) Joyanta Adhikari were, among others, present.
Prof Ainun Nishat, UNFPA officer Md Shamshuzzaman and Barrister Jyotirmoy Barua presided over separate sessions on different topics.
A book named ‘Madhupur: The Vanishing Forest and Her People in Agony’ was launched at the while a documentary, ‘Aronyar Artonad’ was screened. – UNB