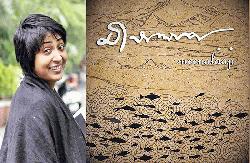 Culture Desk
Suborna Senjutee Tushee’s directorial debut ‘Meenalaap’ was screened on yesterday at the National Art Gallery Auditorium of Bangladesh Shilpakala Academy, Segunbagicha in the city. Titas Dutta, Pramito Dutta, Vivek Kumar, Devas Dixit and others acted in the film.
The 28-munite film is about the alteration of life while living in a lonely city and about hope. Meenalap (Fish Monologue) revolves around a Bengali couple migrated from a remote village of West Bengal to Pune city, working in a garments factory and struggling to meet the ends while expecting a child.
The film delves into the psychological changes of them in the realm of urban alienation in the absence of their own family and culture while becoming a mother and father from husband and wife for the first time.
Tushee has won a prestigious award at the 14th Eurasia International Film Festival for her short-film “Meenalap”. She won the Grand Prix prize in short film category at the film festival which was held in Kazakhstan. Tushee directed and wrote the screenplay of the 2017 movie Meenalap which was filmed in India’s Pune.
She obtained a PG Diploma in Film Direction and Script Writing from Film & Television Institute of India (FTII) in Pune. Now she is engaged in film-making in Bangladesh.