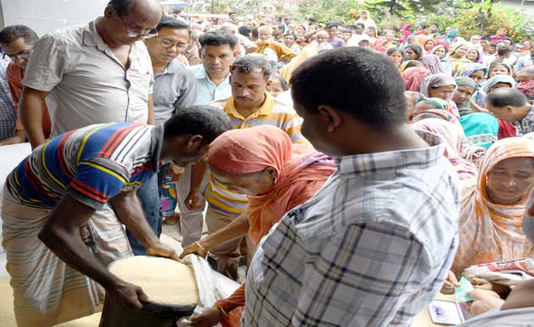 Over 1.54 lakh poor and distressed families will be brought under Vulnerable Group Feeding (VGF) programme in Rajshahi district to mark the end of Ramadan and celebration of the upcoming holy Eid- ul-Fitr festival.
Under the programme, 2,413 tonnes of rice were allocated for distribution among the beneficiary families in all 72 Union Parishads under nine upazilas and 14 pourasabhas (municipalities) in the district.
Each of the card-holder will get 15-kg of rice this time as per the list prepared earlier under the existing social safety net programme.
Meanwhile, distribution of the VGF rice will be completed before end of the holy month of Ramadan and the Eid festival as well.
The government through the Ministry of Disaster Management and Relief has allocated requisite quantity of rice in the district.
As per direction and supervision of the district administration, the concerned upazila administrations with the assistances of local public representatives and union level committees will distribute the rice among the listed VGF Card holder families.
District Relief and Rehabilitation Officer (DRRO) Aminul Hoque told BSS that distribution of VGF rice will be completed within the stipulated time so that the beneficiary poor and distressed families could celebrate the Eid-ul- Fitr in festive mood.
Respective union Parishads prepared the list of the distressed people in their areas and rice will be distributed with approval of the concerned UNOs, Aminul added.
“We are very much hopeful about successful distribution of the VGF rice on time,” said Md Ruhul Amin, ADC (General).
Deputy Commissioner SM Abdul Kader said instructions were given to the Upazila Nirbahi Officers (UNOs) along with project implementation officers (PIOs) to distribute the rice to the beneficiaries smoothly within a very short time.
“We are very much conscious about the quantity and quality of rice scheduled to be distributed,” he added, reports BSS from Rajshahi.