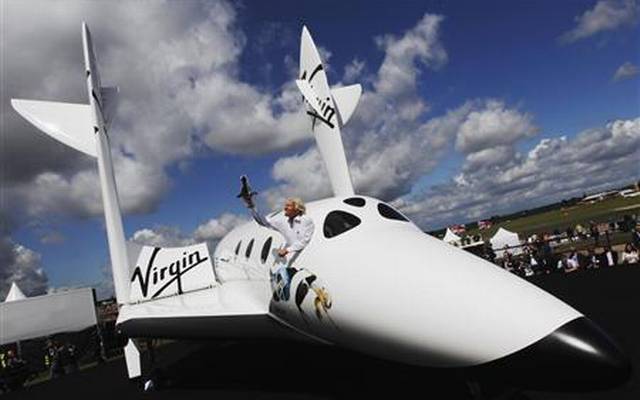 A six-passenger spaceship owned by an offshoot of Virgin Group fired its rocket engine in flight for the first time on Monday, a key step toward the start of commercial service in about a year, Virgin owner Richard Branson said.The powered test flight over California’s Mojave Desert lasted 16 seconds and broke the sound barrier.
“It was stunning,” Branson told Reuters. “You could see it very, very clearly. Putting the rocket and the spaceship together and seeing it perform safely, it was a critical day.”
The spaceship and its carrier aircraft, WhiteKnightTwo, took off from the Mojave Air and Space Port at 7am PDT (10am EDT), heading to an altitude of about 46,000 feet, where SpaceShipTwo was released.
Two pilots then ignited the ship’s rocket engine and climbed another 10,000 feet, reaching Mach 1.2 in the process. Additional test flights are planned before the spaceship will fly even faster, eventually reaching altitudes that exceed 62 miles.
“Going from Mach 1 to Mach 4 is relatively easy, but obviously we’ve still got to do it. I think that the big, difficult milestones are all behind us,” Branson said.
Virgin Galactic is selling rides aboard SpaceShipTwo for $200,000 per person. More than 500 people have put down deposits.
Branson and his grown children plan to be the first non-test pilots to ride in the spacecraft, about a year from now.
SpaceShipTwo is based on a three-person prototype called SpaceShipOne, which in October 2004 clinched the $10 million Ansari X Prize for the first privately funded human spaceflights. Microsoft co-founder Paul Allen bankrolled SpaceShipOne’s development, estimated at $25 million.
So far, Virgin Galactic and partner Aabar Investments PJC of Abu Dhabi have spent about $500 million developing SpaceShipTwo, and expect to sink in another $100 million before commercial service starts, Branson said.
The company plans to build four more spaceships and several WhiteKnight carrier jets, which also will be used for a satellite-launching business.
In addition to flying passengers, Virgin Galactic is marketing SpaceShipTwo to research organisations, including NASA, to fly experiments, with or without scientists.
Other companies planning to offer suborbital spaceflight service include privately owned XCOR Aerospace, which expects to begin test flights of its two-person Lynx rocket plane this year.
(Source: Bdnews24.com/Reuters)