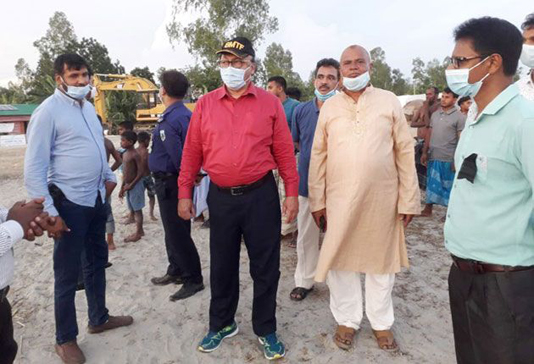 Sirajganj, Aug 13: The Sirajganj Economic Zone (EZ) Limited is expected to generate working scopes for around five lakh people which will remove unemployment problems in the region.The economic zone is being developed with private initiative on the bank of the Jamuna River in a natural landscape environment with all of the necessary privileges for setting up of any heavy industries.
Prime Minister Sheikh Hasina inaugurated the Sirajganj Economic Zone, the largest private industrial park in the country’s northern region, on April 3, 2019 last.
Rajshahi Mayor AHM Khairuzzaman Liton revealed this while visiting the Taka 3,200-crore project site on Wednesday, adding that the zone will be an icon of exploring the existing economic potentialities in the country’s northwest zone.
A consortium of 11 renowned companies has been developing in the largest private economic zone on 1035.93 acres of land and it will also be the country’s largest economic zone.
The Sirajganj Economic Zone is directly connected to the northern part of the country by road, river, rail, and air links. It is also connected to neighbouring countries India, Nepal, and Bhutan by the Burimari, Hili, and Banglabandha land ports.
According to the sources concerned, the EZ is expected to host textile and knitwear, food processing, pharmaceuticals, leather, automobile engineering, LPG manufacturing, steel manufacturing, and fisheries and ship building industries.
Speaking on the occasion, Sheikh Monowar Hossen, project director of Sirajganj Economic Zone, said the aim of building this particular EZ was to perate the most lucrative green economic zone in the country. This will facilitate both local and foreign investment.
He said Tk 2,500 crore was invested to prepare the 1,035-acre economic zone on the West end of the Bangabandhu Bridge.
“This zone will create jobs for 500,000 people, and bring a lot of foreign investment for the private sector of Bangladesh,” he added. He also said jobs created in the EZ would help reduce pressure on Dhaka’s job markets, adding approximately 33 acres of land had been allocated to host people displaced by the set up of the EZ.
Earth dumping works on around 25 percent areas of the project has been completed. Simultaneously, various other works like gas and power supply and road connection are progressing fast. “Development works of the zone are progressing fast, and if everything goes well, the zone will begin its ourney by the beginning of 2022,” he added.
Eleven private enterprises are implementing the project in phases where around 700 small and large industrial units would be set up, he said.
There would be firefighting equipment, water and effluent treatment plants along with other environment friendly facilities at the industrial park.
Around 20 percent of the project area will be conserved for greenery purposes.
Within the first year of launching, around 10,000 employments would be created in textile and knitwear, agro-based food and beverage, pharmaceuticals, automobile, leather, steel, electronics, furniture, power plants and other export-oriented industries.
Monowar Hossen said the government has a target of setting up 100 economic zones on 30,000 hectares of land in the country. The EZs are expected to generate employment for about 10 million people, and additional exports of $40 billion per year.