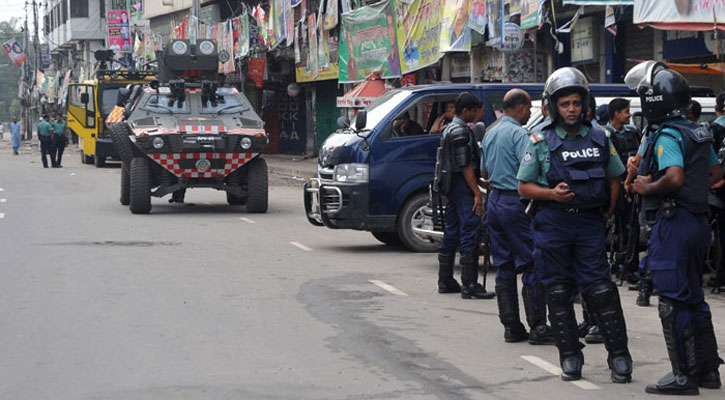 The daylong shutdown in five upazilas of Dhaka district, enforced by
opposition BNP, passed off on amid stray incidents of violence, including
arson, vandalism and arrest on Wednesday.The Dhaka district unit of BNP called the hartal in Savar, Dhamrai,
Keraniganj, Dohar and Nababganj upazilas demanding the release of BNP Joint
Secretary General Amanullah Aman and other party leaders and activists of
the district.
The hartal also meant for registering their protest against showing Aman,
Dhaka district general secretary, arrested in a fresh case to halt his
release from jail.
The capital city, however, was out of the purview of the shutdown.
At least 15 CNG-run auto-rickshaws were vandalised and another torched by
pickets in Keraniganj upazila during hartal hours.
Witnesses said hartal supporters brought out a surprise procession in
Hazratpur area under Keraniganj Model Thana and vandalised eight CNG-run
auto-rickshaws at about 8.00am.
At the same time, another group of pickets damaged seven CNG-run
auto-rickshaws and set another ablaze in Dalkandi area of the upazila.
The shutdown seemed to have laid no impact on public life in South
Keraniganj, Nawabganj and Dohar upazila as pro-hartal activists were hardly
seen on the streets to enforce the programme.
Movements of general vehicles, especially buses and CNG-run auto-rickshaws,
were almost normal during the hartal hours.
On the other hand, activities at Sadarghat launch terminal were also almost
normal.
In Savar and Dhamrai, at least 10 buses were torched and six others damaged
by pro-hartal activists during the shutdown.
Police and witness said the pickets torched four buses and two cars in
Savar-Ashulia area and four buses in Dhamrai upazila.
A group of Juba Dal activists torched a tyre on the Dhaka-Aricha Highway in
Paliarpur area of Savar upazila at about 7.30am.
BNP and its associate bodies brought out surprise processions in different
areas of Savar and Dhamrai upazilas in support of the shutdown.
Savar thana police arrested 14 activists of BNP and Juba Dal along with two
private cars and nine litres of petrol from Tetuljhara and Rajshan area of
the upazila on Tuesday midnight.
Savar thana unit Jubo Dla staged a demonstration at Katapur demanding the
release of Aman.
Police, Rapid Action Battalion and Border Guard Bangladesh members
patrolled the sensitive points in the district.
Aman was to be released from Bangabandhu Sheikh Mujib Medical University
(BSMMU) prison cell on Tuesday as he secured interim bail for six months
from the High Court in a case filed under the Explosive Substances Act.
On March 11, police in a raid on the BNP’s Nayapaltan central office
arrested over 150 of its leaders and workers, including Aman. (Source: UNB)