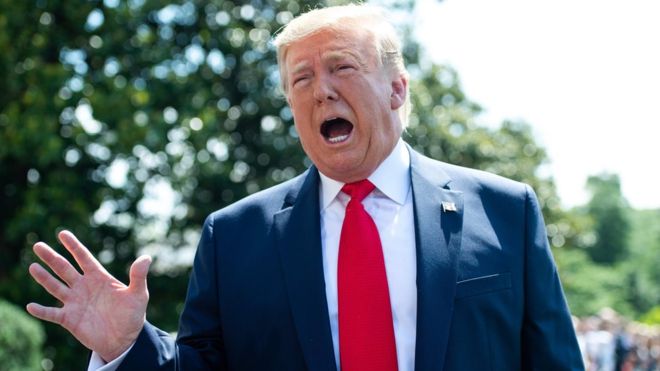 The Trump administration has been labelled “inept”, insecure and incompetent in leaked emails from the UK ambassador to Washington.

Sir Kim Darroch said that the White House was “uniquely dysfunctional” and “divided” under Donald Trump.

But he also warned that the US president should not be written off.

The Foreign Office said the leak of the memos to the Mail on Sunday was “mischievous” but did not deny their accuracy.

The White House has not yet responded to the revelation of the contents of the memos, but it could test the so-called “special relationship” between the US and UK.

He questioned whether this White House “will ever look competent”.

Although Sir Kim said Trump was “dazzled” by his state visit to the UK in June, the ambassador warns that his administration will remain self-interested, adding: “This is still the land of America First”.

Differences between the US and the UK on climate change, media freedoms and the death penalty might come to the fore as the countries seek to improve trading relations after Brexit, the memos said.

To get through to the president, “you need to make your points simple, even blunt”, he said.

In a message sent last month, Sir Kim branded US policy on Iran as “incoherent, chaotic”.

Mr Trump’s publicly stated reason for calling off an airstrike against Tehranwith 10 minutes to go – that it would cause 150 casualties – “doesn’t stand up”, Sir Kim said.

Instead, he suggested the president was “never fully on board” and did not want to reverse his campaign promise not to involve the US in foreign conflicts.

Sir Kim said it was “unlikely that US policy on Iran is going to become more coherent any time soon” because “this is a divided administration”.

The leaked files date from 2017 to the present day, covering the ambassador’s early impressions that media reports of “vicious infighting and chaos” in the White House were “mostly true”.

They also give an assessment of allegations about collusion between the Trump election campaign and Russia, saying “the worst cannot be ruled out”. The investigation by Robert Mueller has since found those claims were not proven.

A Foreign Office spokesman said the public expects diplomats to provide ministers with an “honest, unvarnished assessment” of politics in their country.

“Their views are not necessarily the views of ministers or indeed the government. But we pay them to be candid,” he said.

He said ministers and civil servants would handle this advice “in the right way” and ambassadors should be able to offer it confidentially.

The UK embassy in Washington has “strong relations” with the White House and these would continue despite “mischievous behaviour” such as this leak, the spokesman said.