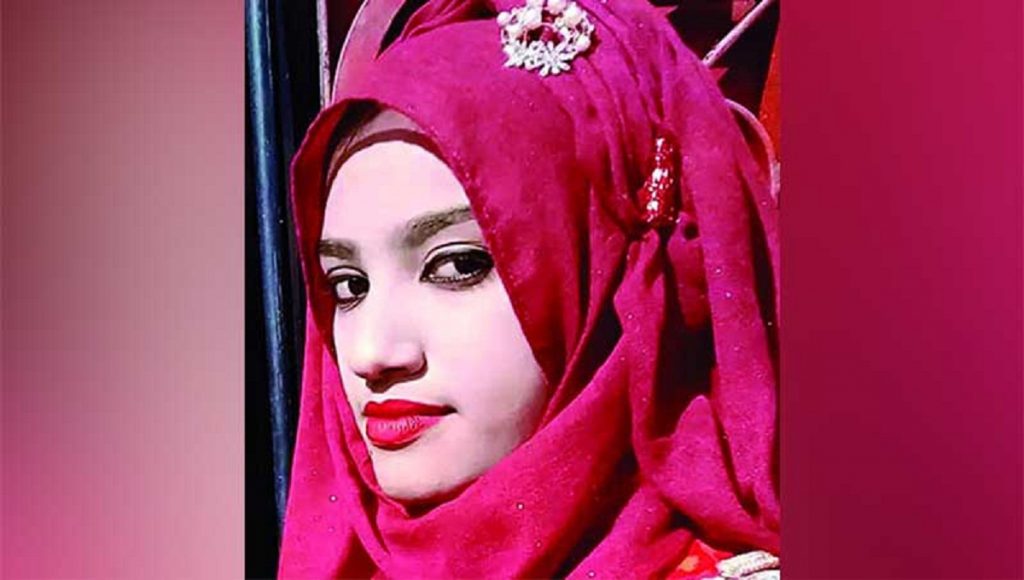 Feni, Sept 30 – A tribunal here on Monday fixed October 24 for delivering its verdict on the sensational Nusrat Jahan Rafi murder case. Judge of the Women and Children Repression Prevention Tribunal Mamunur Rashid set the date after concluding the hearing of arguments of both sides.
Public Prosecutor Hafez Ahmed who stood for the state sought maximum punishment of the accused.
Among the 16 accused in the case, 12 confessed to their involvement in killing Nusrat, a student of Sonagazi Islamia Madrasah, before the court during the trial proceedings.
On May 30, Senior Judicial Magistrate court Judge Jakir Hossain transferred the case to Women and Children Repression Prevention Tribunal.
The accused are madrasa principal SM Sirajuddoula, Awami League leader Ruhul Amin, Shahadat Hossain Shamim, Nur Uddin, Imran Hossain Mamun, Hafez Abdul Quader, Iftekhar Uddin Rana, Councillor Maksud Alam alias Moksud, Kamrunnahar Moni, Saifur Rahman Mohammad Zobair, Javed, Umme Sultana Popy, Mohiuddin Shakil, Mohammad Shamim, Abdur Rahim Sharif and Absar Uddin.
On April 6, Nusrat Jahan Rafi was set on fire on the roof of the madrasah she attended, allegedly by people loyal to the principal of the madrasah after he was arrested and subsequently suspended as she had accused him of sexually harassing her in Sonagazi Upazila of Feni district.
She lost her battle for life at Dhaka Medical College Hospital (DMCH) in the capital on April 10 last.- UNB