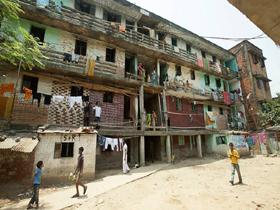 A four-storey highly vulnerable building with some 1,000 people of 140 families in the city’s Pallabi area was being evacuated on Monday.The evacuation drive, led by executive magistrate Saiful Islam of Dhaka district administration, was launched at 3:30 pm as the building (WAPDA building No.4) at Road No-12, Block-B in Mirpur-12 under Pallabi Police Station turned highly vulnerable.
Contacted, officer-in-charge of the police station Abdul Latif Sheikh said 140 families of Urdu-speaking Bihari community had been living in the building for a long time.
As the building, adjacent to Journalists Colony, turned riskier due to numerous cracks, the district administration decided to evacuate the building to avert any possible disaster, the OC said.
Sub-Inspector Ejaz of the police station said the Bihari families were taking shelter in nearby Pragati School and it may take three to four hours more to complete the evacuation.
Meanwhile, president of Bangladesh Bihari Rehabilitation Assembly (BBRA) Niaz Ahmed Khan told UNB that the Bihari people had been living in the risky old building for a long time putting their lives at risk.
“I had informed the director general of the Directorate of Relief about the vulnerable building to take steps in this regard. But it had gone unheeded,” the BBRA president said.
Niaz Ahmed, however, voiced concern as the family members of the building have been made homeless with the sudden evacuation without taking any step to rehabilitate them.
He demanded immediate steps for the permanent rehabilitation of the evacuated families. UNB