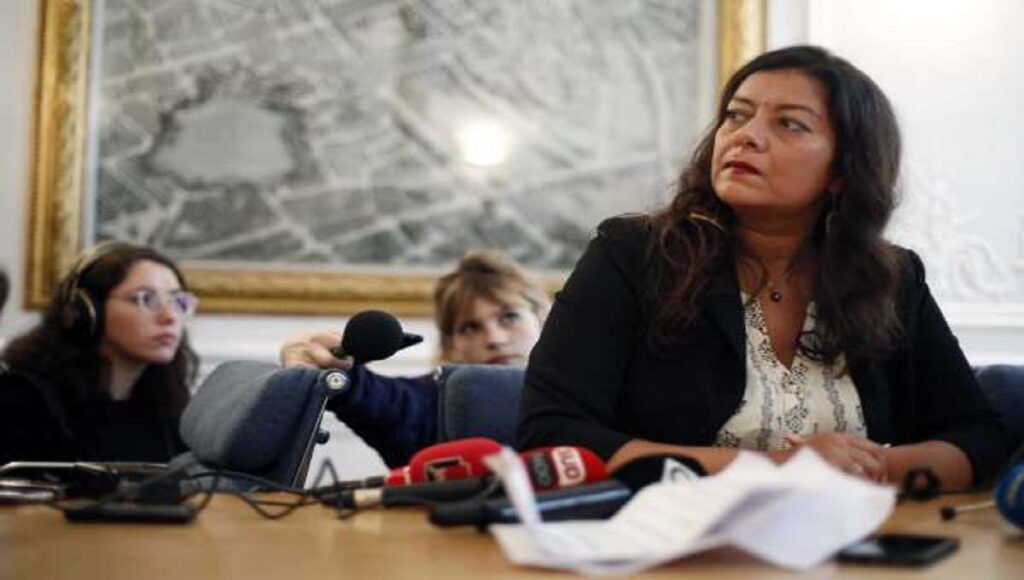 A Paris court ruled on Wednesday that the woman who launched the French version of the #MeToo movement must pay 20,000 euros ($22,000) for defaming the man she accused of harassment.French journalist Sandra Muller said she fears the message of the decision is “be quiet.”
Muller launched #balancetonporc, which roughly translates as “squeal on your pig, “at the height of the global movement against sexual misconduct in October 2017 when she tweeted that former TV channel executive Eric Brion made sexually explicit comments to her.
TIME Magazine featured Muller among #MeToo “silence breakers” in its 2017 “Person of the Year” edition.
Brion, former head of television channel Equidia, took Muller to court over the tweets, arguing that they harmed him and that his remarks to Muller were not harassment. The court ruled in his favor, ordered Muller to delete her tweets and to pay Brion 15,000 euros ($16,400) in damages and 5,000 euros more ($5,400) in legal fees.
“It’s a proceeding that’s intended to silence the victims,” she said at a news conference. “The message is clear: ‘Be quiet.'”
Brion hailed the ruling on Twitter as a “victory of true justice” after “two years of rare violence.”
Muller said she fears the ruling will silence women who have experienced harassment. She plans to appeal.
At the time, Muller urged other women to share stories of workplace sexual harassment.
Hundreds of thousands of posts using the hashtag described instances of harassment and sexism across France.
France has struggled to define the line between flirting and harassment in the wake of the #MeToo movement.
Muller’s lawyer, Francis Szpiner, suggested the ruling could have implications for what, exactly is considered sexual harassment in France.
The decision gives men license to say or do offensive things, he told reporters, and “if they only do it one time, it will be excused by the court,”reports AFP, Paris.