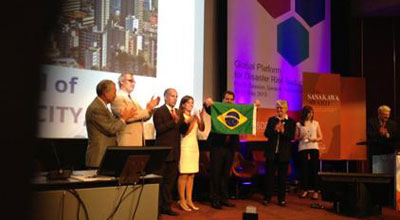 DHAKA: Two of the world’s most disaster-prone countries, Bangladesh and Brazil, today shared the biennial UN-Sasakawa Award which was presented to the laureates by the Head of the UN Office for Disaster Risk Reduction, Margareta Wahlström, in the presence of the sponsor and chairman of the Nippon Foundation, Yohei Sasakawa.Sasakawa said that the theme of this year`s Award was “Acting as One” which the Nippon Foundation had put into action following the Great East Japan Earthquake and Tsunami by working with businesses and NGOs to conduct training workshops on how to operate accessible evacuation shelters for the disabled in times of emergency.
Belo Horizonte, the capital of Minas Gerais State, Brazil, with a population of 2.75 million, has 80 danger points for floods and several landslide risk areas. It received the Award for fostering cooperation between local residents, public utility companies and private businesses on regular inspection of these potential disaster zones.
The Award was shared with the National Alliance for Risk Reduction and Response Initiative (NARRI) from Bangladesh which comprises ten international NGOs which have demonstrated the scale of impact which can be achieved through working in collaboration. NARRI has notably developed mass media campaign materials, supported the HFA monitoring process and engaged with communities on disaster risk reduction.
The Tehran Disaster Management and Mitigation Organization (TDMMO) received a Letter of Distinction for its Amaken Project which encourages residents and office workers to take part in disaster training to mitigate risk at home and in the work-place.
Letters of Merit were given to local governments in the Philippines and Sweden. The Municipality of St. Bernard, Leyte Province, Philippines, was recognized for an early warning system developed after 1,354 people lost their lives there in a landslide. Karlstadt Municipality in Sweden was recognized for its innovative use of social media to raise disaster awareness, particularly of flood threats. Karlstadt`s website even offers “flood risk walks.”
The two laureates, Belo Horizonte and NARRI received $20,000 each and the TDMMO received $10,000. The independent panel of judges comprised: Prof. Murat Balamir, Franklin McDonald, Rowena Hay and Samura Tioulong.
(Source: unisdr/banglanews24.com)