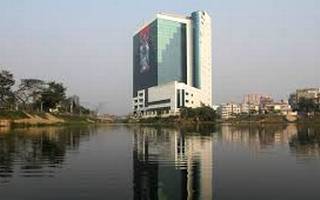 Ready-made garment owners association, BGMEA, on Thursday filed a petition appealing against the High Court ruling to demolish its office building at Hatirjheel on grounds of being constructed illegally.Lawyer Rafique-ul Haque, representing BGMEA, confirmed to bdnews24.com that the appeal has been filed at the Supreme Court.
It now remains to be seen whether the appeal is accepted for hearing by the Appellate Division of the Supreme Court.
Wednesday was the last date allowed for an appeal against the High Court ruling.
On Apr 3, 2011, bench of Justices AHM Shamsuddin Choudury and Sheikh Mohammad Zakir Hossain ordered demolition of the BGMEA with the full verdict given on Mar 19.
The petitioner is given 60 days time for an appeal after receiving certified copy of the order.
The full verdict described the BGMEA building as ‘cancer’ in the Hatirjheel area. “This destructive building will not only affect Hatirjheel, but the whole of Dhaka city,” it said.
The court also directed to return the money taken from those who had rented space inside the building.
The ruling identified the rent contracts as illegal because BGMEA had no right to construct the building there nor to sell any land of the area.
“However, the rent holders knew or should have known about it. Therefore they are not to claim interests,” the order said.
The verdict had said that an institution cannot be put ‘beyond law’ because of its ‘economic power’.
“BGMEA, being an important institution, should have been more the respectful towards the law. Instead, they chose to ignore it,”the order said.
(bdnews24.com)