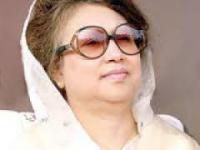 Dhaka-The Metropolitan Sessions Judge’s Court of Dhaka yesterday (Monday) fixed February 1 as the next date for hearing on charge framing in a sedition case and nine cases filed for inciting violence against BNP Chairperson Begum Khaleda Zia. Judge Quamrul Hossain Molla also asked Khaleda Zia to appear to the court on that date.Earlier, Khaleda Zia’s lawyers sought adjournment of the hearing citing their client’s illness. Eight of the cases on inciting violence were filed with Darussalam Police Station and one was filed with Jatrabarhi Police Station for bomb explosion.
Speaking at a discussion on Dec 21 last year, Khaleda Zia allegedly expressed doubts about the government claims that nearly three million people died during the Liberation War of 1971. “There is a debate about how many hundreds of thousands were martyred in the Liberation War. Different books give different accounts,” she said.
The BNP Chief also said Bangabandhu wanted to be the Prime Minister of undivided Pakistan rather than leading the country for independence.
Pro-Awami League Supreme Court lawyer Mumtaz Uddin Ahmed Mehedi sued Khaleda Zia for her alleged seditious remarks.
Nine cases accusing Khaleda Zia were filed with Darus Salam Police Station, of those eight were filed the Special Powers Act. The court allowed Khaleda Zia bail in these cases. The cases under the Special Powers Act have been awaiting hearing for charge framing.
A petrol bomb explosion in Jatrabari’s Kather Pool area during last year’s blockade led to the injury of 30 bus passengers. One of the victims, Noor Alam, later succumbed to the injuries.
Jatrabarhi police filed two cases, where Khaleda Zia has been accused of inciting the attack. Police submitted the charge sheets against the former Prime Minister and 37 others in the cases. – Special Correspondent