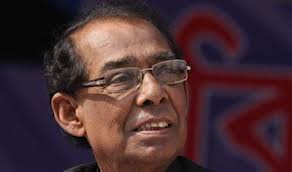 Pointing at BNP senior vice chairman Tarique Rahman, minister without portfolio Suranjit Sengupta on Friday said doing politics being a fugitive in a country goes against its constitution and democratic norms, and advised Tarique to do so after facing the law.
“We (govt) don’t want to snatch the political rights of anyone. Tarique Rahman is an important person of a highly responsible political party. It’s not right he’ll do politics without showing respect to the rule of law,” said Suranjit.
Speaking at a discussion in the capital, the advisory council member of the ruling Awami League also said, “We expect him (Tarique) to return to the country (from UK) and surrender before the court. Thus he should do politics through facing the law, but not through any other means.”
Central committee of Bangbandhu Academy, a pro-government body, organised the discussion, titled ‘Trial of Col Taher’s Killing-Falsehood of the Opposition Leaders: Government’s Responsibilities’ in the capital’s Institution of Diploma Engineers, Bangladesh.
Tarique Rahman, who faces 16 cases on various charges, including money laundering and the 2004 grenade attack on an AL rally, was forced to leave the country in 2008 during the army-backed caretaker government.
According to media reports, the BNP leader on Monday at a views-exchange meeting in East London called upon all expatriate Bangladeshis to play their roles from their respective position to force the government to reinstate the caretaker government system.
Airing his doubt over the main opposition BNP’s demand for restoration of the caretaker government system, Suranjit Sengupta said, “BNP has to settle whether they are on CG demand or have shifted their stance regarding Hefat’s May 5 sit-in in the capital.”
He went: “They (BNP) must make it clear before the nation that they have rejected the Hefajat’s 13-point demand and restoration of the CG system is their key demand.”
Calling upon BNP to sit for a dialogue with the government to resolve the ongoing political crisis, the Awami League leader said, “You (BNP) sit in a dialogue without any precondition shunning the politics of ultimatum.”
Referring to the widespread violence carried out by Hefajat activists during and after their May 5 rally in the capital, Suranjit Sengupta suggested the authorities concerned to give permission to the political parties to hold their meetings and rallies in a designated and safe venue.
“The political party that will be given permission to hold meetings or rallies, must promise they’ll provide compensation in case of any damage to public property.”
State Minister for Law Advocate Quamrul Islam, among others, spoke at the programme.
Source: UNB connect