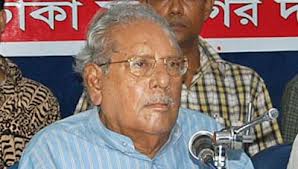 They were freed from Kashimpur Central Jail at 6.30 pm.

On May 15, law enforcers held BNP Joint Secretaaary General Bakatullah Bulu from in front of BNP’s  central office at Nayapaltan in the capital.

While on May 27, BNP Standing Committee Member MK Anwar was sent to jail rejecting his bail plea after he surrendered before the court in a case filed against him for his alleged involvement in instigation of communal violence.

The main opposition BNP on Thursday submitted a memorandum to the Speaker of parliament urging her to take immediate steps for release of party lawmakers MK Anwar and Barkat Ullah Bulu before the upcoming session of the parliament.
Court correspondent