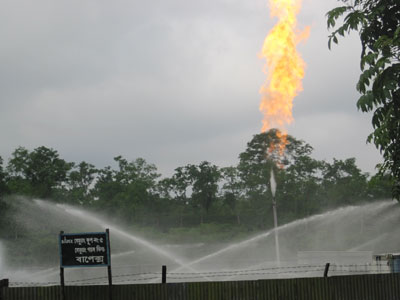 Drilling of no. 20 well of Titas gas field in Brahmanbaria has been completed.
Upon completion of the drilling, 30 million cubic feet (cft) gas from
this well could be supplied to the national grid.
To resolve the ongoing gas crisis, Bangladesh Gas Field signed an
agreement with Russian state owned oil company Gazprom.
Under the agreement, five wells in two gas fields will be drilled, of
which four are in Titas gas field and rest one in Rashidpur gas field.
Officials concerned expect that along with the gas, 120 barrels of
non-refined oil could be extracted from the wells every day.
Expenditure of the first track project was estimated at about Tk800 crore.
Drilling of the three other wells in Titas gas field will start soon.
After the drilling work ends, at least 120 million cft gas could be
supplied to the national grid.
Two process plants will be set up to process and supply non-refined
oil along with gas from the four wells.