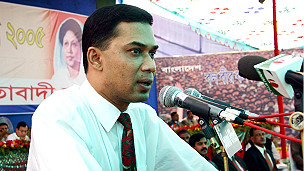 A Dhaka on Sunday recorded the deposition of 12th witness in the money laundering case filed against BNP Vice-Chairman Tarique Rahman and
businessman Giasuddin Al Mamun and fixed July 14 as the next date of hearing.Judge Md Motahar Hossain, who joined Dhaka’s Special Judge Court-3 as the new judge on June 24, recorded the deposition of witness Omar Faruque Bhuiyan, Sonali Bank Official of Cantonment branch.
According to the case details, the Anti Corruption Commission (ACC) filed the money laundering case against Tarique and Mamun with Dhaka Cantonment Police Station on October 26, 2009, accusing the duo of “siphoning off Tk 204.1 million to Singapore” between 2003 and 2007.
The ACC, on July 6, 2010, submitted the charge sheet for the case to the Chief Metropolitan Magistrate (CMM) Court of Dhaka after investigation.
On August 8, last year, the court framed charges against Tarique and Mamun under the Money Laundering Act 2002 and issued arrest warrant against Tarique.
Mamun was produced to the Special Judge Court-3 on Sunday.